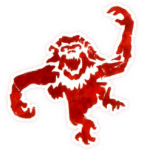 In order to understand this unusual mercenary unit, one must first understand the origins of its leader, Taharqa Bane. Bane is a clansman originally from Clan Fire Mandrill, although he came to the Inner Sphere as a bondsman for Clan Jade Falcon. Captured in the battle for Coventry in 3058, Taharqa briefly served with the Wolf’s Dragoons before dropping off the radar screen for some time. He resurfaced in 3061 on Solaris VII as Taharqa “Howler” Bane. Taharqa had a successful career on Solaris VII and was able to found his own small stable which he named “The Flaming Devil Monkeys.” The Flaming Devil Monkeys had a good record for several years, but in 3067, Bane lifted off-world with most of his stable. They had decided to bring their gaming days to a close and re-invent themselves as a mercenary unit.

The Flaming Devil Monkeys are not the first group of gaming world veterans to enter the mercenary field. However, such events are relatively uncommon because of the disconnect between the highly ritualized battles of Solaris VII and the “messier” battlefields of real life. Many gaming world veterans have difficulties with the harsh realities of total warfare.

The reasons for this move almost certainly stem from Bane’s own history. He is a highly charismatic figure and most likely the rest of the Monkeys simply followed their leader. But the name that Taharqa Bane chose for his group is likely more than just catchy and reflects in an ironic way the acute psychological trauma that Bane feels, despite his outward “devil may care” attitude. Twice captured in his career as a clanner and briefly forced to serve as a tech for Clan Jade Falcon, Bane has suffered humiliation that has driven many a clansman over the edge. It is likely that he sought the glories of the Game World in order to heal from these wounds and recover his own sense of self worth. In other words, by cleansing himself in the fire of combat, he sought to silence his internal demons and get the proverbial monkey off his back.

However, ultimately Bane found the nature of the game world unsatisfying and it was this lack of satisfaction behind his decision to transform his stable into a mercenary unit. Bane apparently continues to seek some kind of personal redemption that he felt he could not achieve on Solaris VII.